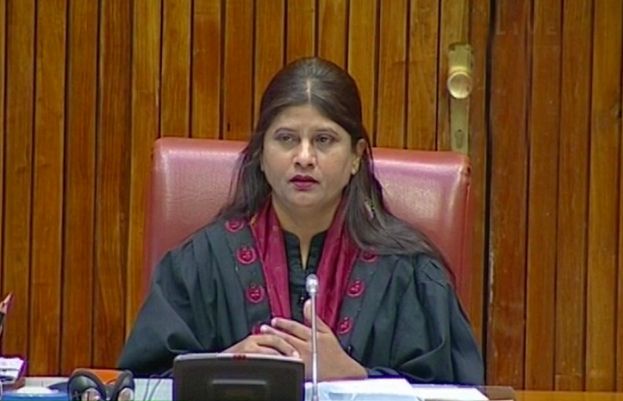 The Senate on Friday unanimously handed a decision to precise solidarity with Kashmiris in reference to Kashmir Solidarity Day, which will likely be noticed throughout the nation tomorrow (February 5), throughout a session that was chaired by a Hindu senator.

Senator Krishna Kumari Kohli chaired right this moment’s session and was welcomed by the loud thumping of desks as she sat on the chair’s seat.

“A Hindu presiding [over] the Senate session on Kashmir in Pakistan. Chairman Senate [asked] our colleague Krishna Kumari Kohli to do the honour. In reference to #KashmirSolidarityDay, it is a sturdy message going out depicting [the] distinction between Pakistan and Hindustan,” Senator Faisal Javed Khan mentioned on Twitter.

In her personal tweet, Kohli mentioned it was a “nice honour”.

It’s nice honour i chaired senate session referred to as to debate the present scenario in Indian illegally occupied Jamu and Kashmir on the eve of Kashmir Solidarity day.Thanks @SenatePakistan, Thanks chairman @BBhuttoZardari for giving me alternative to be member of Senate Pakistan pic.twitter.com/TSNN8mS6yG

“It’s nice honour [that] I chaired the Senate session referred to as to debate the present scenario in Indian Illegally Occupied Jammu and Kashmir (IIOJK) on the eve of Kashmir Solidarity Day,” she mentioned.

The senator, who was elected in 2018 to a reserved seat on a PPP ticket, thanked social gathering chairman Bilawal Bhutto-Zardari for giving her a possibility to turn out to be a member of the higher home of Parliament.

Kohli grew to become the primary Hindu Dalit girl to be elected to the Senate in 2018. Previous to changing into a senator, she was an activist in a village in Nagarparkar.