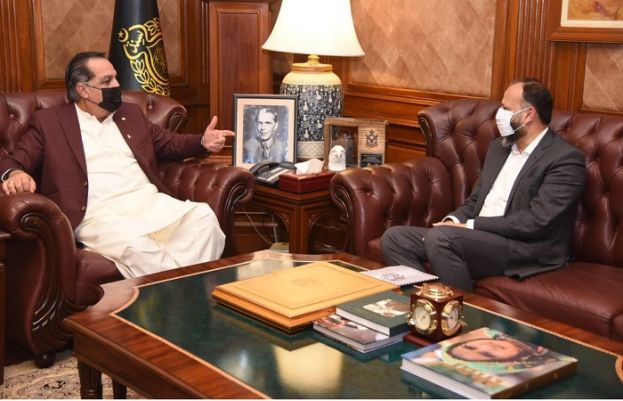 Sindh Governor Imran Ismail on Monday expressed anger over the “continued unannounced load shedding” within the metropolis and directed the Okay-Electrical CEO Moonis Alvi to instantly resolve the problem.

The governor had summoned the chief of KE — the utility firm chargeable for energy provide within the metropolis — following studies of accelerating outages within the metropolis. Through the assembly, Ismail directed the KE CEO to “personally supervise” issues associated to load shedding in Karachi and “instantly resolve the “complaints of residents, an announcement issued by the Governor’s Home stated.

Through the assembly, Ismail additionally phoned Federal Minister for Power Hammad Azhar and harassed the necessity to enhance the load shedding scenario within the metropolis and guarantee higher functioning of the Okay-Electrical.

Azhar issued instructions to the KE CEO in the course of the name as effectively, the assertion stated.

Earlier this month, a number of areas in Karachi confronted extended energy outages after a high-tension transmission line of 220KV tripped, affecting the availability of electrical energy to the related grids.

The ability provide was restored by the night.

Residents from completely different areas of the metropolis have been complaining of a number of hours of load shedding day-after-day because the climate stays sizzling and humid.

KE has round 2.5 million shoppers and a whole lot of hundreds of them face load shedding each day. However a spokesperson for KE had earlier informed Daybreak that the corporate’s load shedding coverage was a “well-thought-out and thoughtful technique for the residents of Karachi”.

He stated: “Okay-Electrical’s Segmented Load Shed (SLS) coverage divides feeders based mostly on their loss profile, which is set by the T&D [transmission and distribution] losses and restoration ratios in any specific space.”

In February, the Nationwide Electrical Energy Regulatory Authority (Nepra) had warned KE of “penalties” if folks of Karachi suffered loadshedding in summer season.