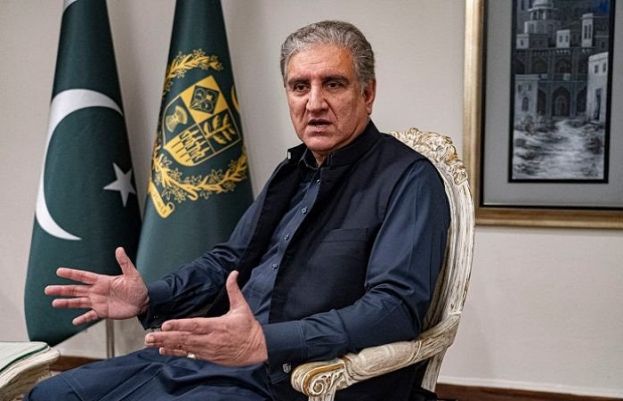 International Minister Shah Mahmood Qureshi, in his response to the continuing hijab controversy in India, has termed the intimidation of Muslim ladies for carrying hijab in Karnataka “an act of coercion.”

The controversy intensified after a video displaying a Muslim hijabi girl being heckled by over 100 male college students carrying saffron scarves in Karnataka went viral on social media.

Taking to Twitter, the international minister condemned the extremist gesture, saying that stripping Muslim women of their proper to schooling is a violation of basic human rights.

Depriving Muslim women of an schooling is a grave violation of basic human rights. To disclaim anybody this basic proper & terrorise them for carrying a hijab is completely oppressive. World should realise that is a part of Indian state plan of ghettoisation of Muslims.

“Depriving Muslim women of schooling is a grave violation of basic human rights. To disclaim anybody this basic proper & terrorise them for carrying a hijab is completely oppressive,” FM Qureshi wrote.

He urged the worldwide neighborhood to take discover of what he referred to as a “ghettoisation of Muslims” beneath the Indian state plan.

In the meantime, international coverage and South Asian affairs analyst Michael Kugelman additionally responded to the incident in certainly one of his latest Tweets, questioning India’s future after all of the hate and extremism turning into prevalent there.

He additionally condemned the harassment of the Muslim girl for working towards a side of her faith, which she has the constitutional proper to do, and the Indian authorities’s silence over the matter.

“When the flames of hate have unfold to varsities, when younger Muslim ladies are harassed for merely exercising their constitutional rights, and when the state continues to reply with stark silence, thereby emboldening the haters—what then does this portend for the long run in India?,” Kugelman wrote.

On Tuesday, a video of a hijabi girl named Muskan being accosted by a “saffron-scarf clad mob” chanting “Jai Shri Ram” (victory to lord Rama) when she entered her school prompted a stir amongst individuals, in keeping with India At this time.

In response, the woman chanted “Allah Hu Akbar” (Allah is the Best) and turned her again in direction of the mob.

Talking to India At this time, the woman stated: “They requested me to take my burqa off and weren’t letting me in. As quickly as I entered the school, the group began chanting Jai Shri Ram.”

The woman stated that the mob included outsiders and boys from her school, nonetheless, the school workers supported her. “I used to be scared when the mob surrounded me,” she added.

The protests have intensified for the reason that hijab row in Karnataka. Just a few days in the past, a school in Udupi locked hijabi college students outdoors the school.