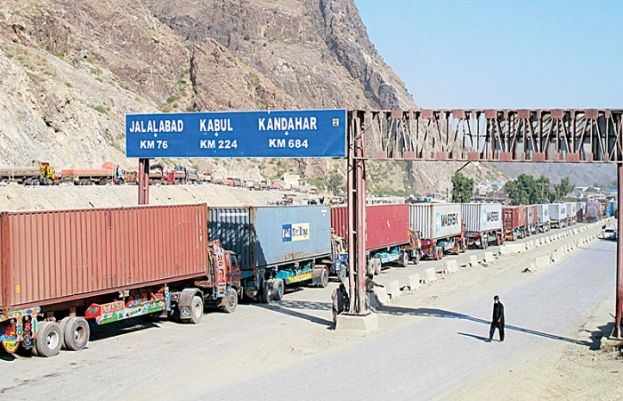 Commerce with Afghanistan by way of Torkham remained suspended on the third consecutive day on Thursday as Khugakhel tribesmen continued their protest and blockade of the principle street resulting in the border crossing.

Afghan nationals aspiring to return to their nation have been, nevertheless, supplied with an alternate route through Charbagh space to succeed in Torkham as a part of a good-well gesture by the protesters because the travellers additionally included ladies, kids and aged folks.

Mufti Ejaz and Mirajuddin Khan, the elders of Khugakhel, informed journalists on the protest website that their protest would proceed until signing of a mutually agreed accord relating to fulfilment of their 4 main calls for with concrete ensures from the regional safety officers.

The Khugakhel tribesmen, being the collective house owners of the land leased out for the development of recent customs terminal at Torkham, had lengthy been pushing for cost of the value of the extra land the Nationwide Logistic Cell (NLC) had off late acquired for the terminal, share within the month-to-month revenue from the terminal and sufficient share in jobs for the youth of the tribe.

Each Mufti Ejaz and Mirajuddin mentioned that Federal Board of Income, with whom that they had earlier signed an settlement relating to lease of their land in 2016, and NLC had dedicated to signal a brand new settlement relating to acceptance of their calls for in February however later they backtracked on their promise they usually have been compelled to resort to protest.

In the meantime, scores of representatives of assorted political events and native tribal and spiritual leaders visited the location of the protest close to Landi Kotal bazaar and prolonged assist to the protesting Khugakhel tribesmen and known as upon the officers involved to assist resolve the difficulty.

No negotiations between the Khugakhel elders and authorities officers have been held on Thursday whereas the day additionally remained peaceable as police prevented taking any motion in opposition to the protesters.